You are here: Home1 / News2 / Listuguj Mi'gmaq Government3 / Successes in the fisheries 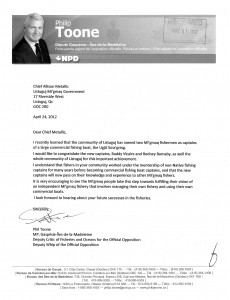 I recently  learned that the community of Ustuguj has named two Mi’gmaq fishermen as captains of a large commercial fishing boat,the Ugjit Sma’gnisg.

I would like to congratulate the new captains,Buddy  Vicaire and Rodney Barnaby, as well the whole community of Listuguj for this important achievement.

I understand that fishers in your community worked under the mentorship of non-Native fishing captains for many years before  becoming commercial fishing boat captains, and that the new  · captains will now pass on their  knowledge and experience to other  Mi’gmaq fishers.

It is very encouraging to see the Mi’gmaq people take this step towards fulfilling their vision of an independent Mi’gmaq fishery  that involves managing their own fishery and using their own commercial boats.

I look forward to hearing about  your future successes in the fisheries.

Deputy Critic of Fisheries and Oceans for the Official Opposition