You are here: Home1 / News2 / News-PSA3 / Saint-Anne’s Church Burns – Remembering its Role in Education in Listu... 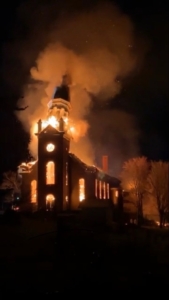 Saint-Anne’s Catholic Church, built of stone and wood, was the largest and tallest structure in the centre of Listuguj Mi’gmaq First Nation community.  The first church in Listuguj, dedicated to Saint Anne, was built around 1740.  The Catholic religion remains a part of the culture for many Mi’gmaq throughout Mi’gma’gi. This is a complex and sensitive history.

The relationship between the Mi’gmaw Nation and the Holy See began in 1610, with the Concordat and the baptism of Membertou, and his extended family. In the seventeenth century, Recollect Father Chrestien LeClercq arrived in Gespe’gewa’gi and documented Mi’gmaw knowledge systems, spirituality, political, legal traditions, and ways of living, albeit from a heavily slanted Euro-centric point of view.

In 1894, Capuchin Father Pacifique (Henri Buisson d’Valigny) arrived in Listuguj where, working with Mi’gmaq people, he learnt Mi’gmaw language, hieroglyphic writing system, and developed the Pacifique Orthography, which is still in use by some Mi’gmaq communities in the broader territory. The Catholic Church was also responsible for, and involved in aspects of, education in Listuguj from 1856 onwards, including inviting the Sisters of the Holy Rosary to teach at the Indian Day School, from 1903 until 1961/1969. The church was built on lands set aside for mission purposes and for the schooling of Indigenous children.

After 1961, the federal government deemed the school a provincial school and the Day School fell under the authority of Quebec’s school board. Yet, the church was still heavily involved in education, and the Sisters of the Holy Rosary continued to teach during this period of ‘integration’. This history – of the church, including its role in education for Mi’gmaq – needs to be remembered.

In Listuguj, the most recent church was built in 1912/13. In 1926, the interior burnt, but the walls remained standing, and the structure was quickly re-built. Saint-Anne’s Catholic Church stood in Listuguj until April 26, 2021, when it caught fire at around 9:30 p.m. Many Listuguj community members, and neighbours across the bridge in Campbellton, New Brunswick, witnessed its burning through the night. Many are showing solidarity with Listuguj today.

A Message to our Community
Scroll to top