A member of the Listuguj band, Mike served his home community as a Police Officer for 11 years. In addition to this, Mike worked in Ottawa as a member of the Civil Service in various departments, the last being CSIC (Canadian Security Intelligence Service). 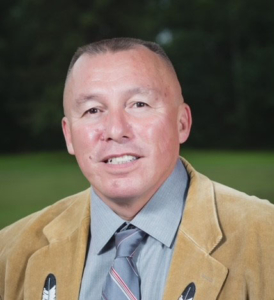 A career re-orientation appealed to Mike, so he returned to university and earned his B.A., B.Ed., and M.Ed., and went on to teach Elementary schools in Cape Breton. This experience led him to the position with the Department of Education of Nova Scotia as Mi’gmaq Consultant for all schools in that province. Wanting to be closer to family, Mike relocated to northern New Brunswick and became Principal of the New Richmond High School for 5 years, before accepting the position as Director of Research for the Mi’gmawe’l Tplu’taqnn. His passion and strong beliefs in the powerful role education plays in personal empowerment is fulfilled by his various on-going contracts as instructor for the following universities: Acadia, Cape Breton, and McGill.

Mike states that some of his proudest and most personally gratifying achievements happen in his life “outside of the classroom”. He is married to Cheryl Kouri, is the father of Mikey, Mitchell and Mallory and is “Dunda” to Grayson, Cohen, Ryenn, Hallie-Lou and Denver.