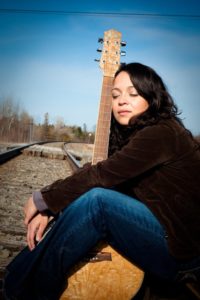 Born and raised in the Campbellton, New Brunswick area, Melissa began songwriting at the age of 14.

After expressing her gentle, free spirited nature through acoustic song bird presentations beginning at the age of 25, she appeared in headline shows on both sides of the Baie des Chaleurs. Melissa then began touring the Maritimes, building a community of Girvan fans from southern & northen New Brunswick, to Nova Scotia, and Quebec.

In 2012, Melissa was asked to perform at the Empress Theater in Moncton, NB for the First Nations Showcase at East Coast Music Week. She reached out to the crowd in a way that brought some to tears, and left everyone amazed with her performance.

In the past 4 years, she made APTN television appearances on The Candy Show Season 2, Makusham Season 1, Tam Season 2, and most recently Tam Season 3 Episode 4, released in September of 2013.

After multiple performances along the eastern shoreline, Youtube Sensation Series – Jeff’s Musical Car – released an episode of Melissa Girvan performing her hit song ” As Days Go On ” in February 2013.

Radio station CHRQ 106.9 FM in Listuguj, QC, has been a great support and has placed many of her tracks on rotation.

Admired by Aboriginal music supporters, Wapikoni Mobile, joining forces to release the single and video for “Every Afternoon”, brought a look inside the every day life of Melissa’s love of nature. A new video directed by Melissa, filmed by Wapikoni, was recorded in June 2013 for “I’m Still Fallin” (due out November 2013).

March 2013, Melissa returned to ECMW and the First Nations Showcase, and released her EP – Every Afternoon.

Working with Musique Nomad, she released the official video for “What Is This Life”, midway through ECMW 2013. Shortly after, work began on her first fully mastered album with Laurent Aglat of Musique Nomad, who’s audio engineering brought life to the favorited single.

The new album “As Days Go On”, which was finished up the summer 2013, was in large part, thanks to the community that supported Melissa through her career as well as the Indiegogo fundraising process. Tracks off the new album have already had airplay on CHSR 97.9 (Fredericton) and CHRQ 106.9 FM.

A mother of three children, Melissa Girvan stays grounded and true to her roots, while sharing her gifts of song with folk and pop listeners alike.