The Aboriginal Financial Officers Association of Canada held a professional 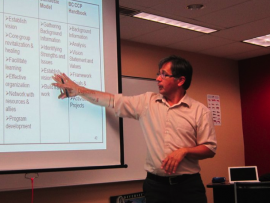 Comprehensive Community Planning from a First Nation’s point of view are considered less program driven and more community driven.  It is a multi-staged planning process that require years of development through an intensive community consultation process.  For Listuguj First Nation to create and implement their own CCP would require their own unique perspective.

“It’s time we have a comprehensive community planning session,” said Chief Allison Metallic.  “We need need to know where we are going in the next 15 to 25 years.  We need to protect our treaties and aboriginal rights through our Mi’gmaq way of thinking,” he said.

“For me, what I think it offers is an opportunity for people to take a moment to try to take a look at the big picture, and it’s a way of organizing the million things that we have to do as community members, as program staff, and as Chief and Council.  So all of that stuff we get a chance to take a step back and figure out how we might want to reorganize this.  To me I think that’s probably the most valuable piece of having a comprehensive community plan,” said Harold Tarbell, workshop facilitator.

Tarbell mentioned that as CCP’s touch on virtually every sector from governance, band management structure, health, education, social, culture & language, to economic development and housing. Planning a CCP maintains that government respond to both the needs and diversities of communities.

“We are seeing that governments are able to respond whether it’s Health Canada responding to the health component or the Economic Program responding to the economic component within a given CCP.  The third piece is that you are encouraged to look for other funders other than the normal go to funders, so I think that has a certain value,” said Tarbell.

Among the various models presented towards developing a CCP the Dalhousie University model was most popular among Atlantic Canada’s First Nation communities, others consisted of the INAC, Bopp & Bopp and the CCP Handbook models currently available.  CCP’s represent the vision of a particular community based on the needs of the community and reflect their cultural values.

“What we’ve also heard from communities as the most valuable piece of a CCP is what it offers as a bit of a marketing tool and a tool for people to, in a sense, provide resources and supports to the community, so that’s been quite valuable.  I think the process can be quite useful,” said Tarbell.

Harold Tarbell has been facilitating programs with First Nation communities and their leaders for many years.  He worked alongside with Buffy Sainte-Marie during her “Cradleboard” project in 1996 among other things, and currently sits as Deputy Speaker for the Assembly of First Nations during their annual gatherings.  He has developed a knack for helping others work towards reaching their goals.

“Because I’ve had the ability to work in every sector mostly as a facilitator in Economic Development, Education, Health, Governance, Management, Evaluation, Communications, Youth Development, I’ve had a chance to work in all of those.  So for me when AFOA offered me an opportunity to work a few years ago it was a natural thing for me.  I’ve always been into strategic planning, having my first experience in 1990 and later as an independent facilitator since 1996.  I’ve been doing it ever since.”