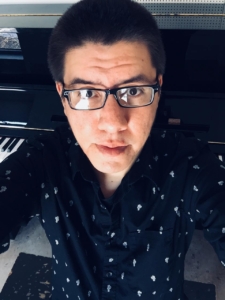 Elvis Jerome is from Listuguj, Quebec and is a classical and rock guitarist with 17 years of playing experience. He plays classical guitar, electric guitar, bass guitar, piano, violin, viola, ukulele, and mandolin. In 2004, Elvis was awarded the winner of Listuguj Idol! A couple of years later, he made his electric guitar debut performance at the Alaqsite’w Gitpu School.

His research focuses on the music of Randy Rhoads from Ozzy Osbourne. He studies his use of modes in soloing, modes in harmonic progressions, classical guitar borrowed inspirations, and classical music inspiration from Antonio Vivaldi, and Johann Pachelbel.  He is open to collaborating in music research projects, supervise and/or collaborate in research projects in the music of Randy Rhoads.

AC/DC – You Shook Me All Night Long

CALL FOR ARTISTS
Scroll to top